The Silk Road black market platform emerged in the early 2010s, on the dark web, which was, and still is, a notoriously unregulated part of the Internet.

For two years, between 2001 and 2013, this website, which was considered the first darknet market, and the Amazon of the darknet, generated over $1.2 billion dollars in bitcoin revenue.

The Silk Road achieved this by connecting over 4, 000 drug dealers and their customers together, where they could easily advertise their 'products', carry out their transactions anonymously, and deliver the 'merchandise' with low risk of discovery.

In addition to 'digital drug trafficking', other types of illegal activity on the Silk Road included the sales of hacked passwords and fake drivers licences.

In this article, we explore how the Silk Road worked, and the circumstances in which the FBI caught the owners and brought the site down. We then take a brief look at the Silk Road's legacy and what followed throughout the remainder of the decade.


How Did The Silk Road Work?

The Silk Road black market evolved out of the technical evolutions that were designed to improve people's lives for the better.

The convenience of buying online need to be secure, which encryption technology helped resolve. We then entered an era of data privacy, and online anonymity platforms emerged to support the demand for online privacy. These platforms included the dark web and cryptocurrency, such as bitcoin.

The combination of these demands provided the space on the Internet, and the tools, to conduct illegal activity with added protection from getting caught by the authorities, when compared to traditional means, e.g. dealing on street corners. The Silk Road website was created by Ross Ulbricht, and launched in February 2011.

Accessing the Silk Road black market was not easy. First, you needed access to the dark web, which was only possible through the specialist ToR web browser. The ToR basically anonymizes your online activity by obfuscating your IP address and encrypting your connection to the dark web.

Once connected ton the dark web, you needed to know the web address of the website. Traditional web address are made easy to remember. However, the dark web doesn't work that way. The Silk Roads web address was silkroad7rn2puhj.onion.

Now you are at the website, you had to create a buyers account before you could purchase anything. You also needed bitcoin, and have a bitcoin wallet setup to pay for your products.

The image below shows you what the website looked like. Apart from the fact that it is selling illegal drugs, it looked similar to traditional 'surface web' merchant sites around the early 2010s, with the menu on the left-hand side, and pictures of products on the right, with their quantities and bitcoin costs. 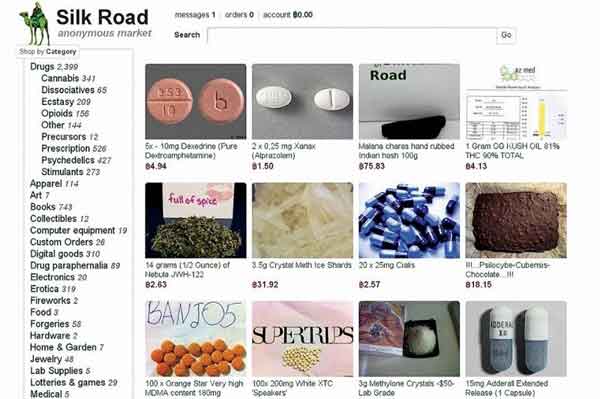 To register as a seller, you effectively had to buy a seller account in exchange for bitcoin, and every sale you made, a percentage of your profit was paid to the website owner(s).

The FBI depicted the Silk Road purchase and payment system that Ulbricht created, which is shown in the image below. 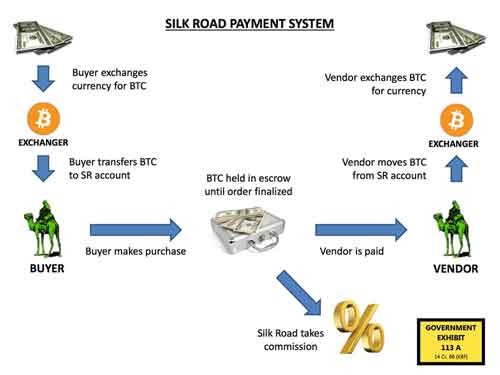 The bitcoin escrow is an interesting element of the payment system. This provided buyers with assurance that they would not lose their money, if their product was not received. It also fixed the bitcoin value at the point of purchase, to mitigate against any changes in bitcoin value.

A feedback system was also set up for buyers to comment on each seller, such as the quality of their products. This helped identify any fraudulent sellers, and installed further buyers confidence in the Silk Road black market.

It was a sophisticated setup that raked in millions of dollars over its 2.5 year lifespan. However, like most illegal activity, and especially activity of this scale, the authorities eventually catch up with you, and justice is served.


How The Silk Road Was Brought Down

The Silk Road black market was brought to the attention of the FBI, mainly through the sleuthing of an IRS criminal investigator called Gary Alford. The FBI were aware that this site was run by someone calling themselves 'Dread Pirate Roberts', but they didn't know whether this was one person, or many people.

As a consequence of the dark web and anonymity tools, the FBI and other agencies such as the DEA and the IRS, had their work cut out to track down the perpetrators, and source the key evidence that would bring them to justice.

However, this is exactly what they did. The FBI managed to source the authentic or original IP address of the server that was hosting the Silk Road website. This was traced to Reykjavík, Iceland, and was made possible by a data leaks from the CAPTCHA services that was running on the site.

CAPTCHA, or reCAPTCHA, is a form of Artificial Intelligence from Google, that helps to protect websites from abusive activity by malicious software. If you've every had to tick a box stating you are not a robot, or pick the cars, bikes or traffic lights from a series of images, then you've used the CAPTCHA service.

Now that authorities knew who 'Dead Pirate Roberts' (DPR) was, and where the site was hosted, they could make their arrests. Ulbricht was arrested on the 2nd October 2013 and charged with money laundering, computer hacking, conspiracy to traffic narcotics, and attempting to murder six people. The website was also shutdown in October 2013.

The court case concluded in 2015, but not after Ulbricht put up a fight to reduce his sentence. One claim was that although he admitted to setting up the site, he tried to shift blame on to another, namely a Mark Krepeles, by stating that he was the administrator, and DPR, not him. This was quickly disproven by prosecutors.

Although the murder charges were eventually dropped, Ulbricht was eventually sentenced in 2015 to life without the possibility or parole.

You would think the ultimate demise of the Silk Road black market and the sentences passed down to the perpetrators would be a deterrent to other wannabe Ross Ulbricht's. Wrong. The lure of money and the riches are worth the risk for many people.

A slew of copycat sites emerged, such as 'The Black Market reloaded', but ultimately, they were shut down too, and none managed to emulate the 'success' of the Silk Road.

Sites on the dark web, such as AlphaBay and Hansa, were taken down on the same day through a sting called Operation Bayonet in July 2017, but not after making hundreds of millions of dollars.

I expect it is highly resourceful for the FBI and other law enforcement agencies to investigate, tack and bring to justice websites such as Silk Road.

However, they can also go for the high-profile dealers, or sellers, on these sites too, which I expect acts as a deterrent for some buyers and sellers, and undermines their trust that such sites provide the protection from law enforcement they want and need.

There are other techniques available to disrupt online services, such as DDoS attacks (Distributed Denial of Service) and malware, at the disposal of actors who are against such dark web activity.

Despite the sophistication of modern technology, illegal activity in the digital era can still be punished. However, the cat and mouse game between criminals and law enforcement is set to continue, even if the arena, in which it takes place, changes over time.

The Silk Road black market website was pioneering at the time, albeit for all the wrong reasons. I wonder what Mr Ulbricht could have done with this knowledge and skills, if he hadn't turned to crime.

There are a couple of websites I would lie to draw your attention to, for further detailed information on the Silk Road activity.

The Wikipedia site has pretty much everything you need to know on this topic, especially if you want to delve deeper in to criminal activities, and the subsequent trial and FBI discoveries. Also, the CBS News FBI Declassified series is an excellent source of videos and articles about the Silk Road. Enjoy.