We've not updated this article for a while now, but it still may contain useful information for you
eComputerZ
Understanding Technology
Menu

Microsoft Windows XP Updates are a fact of life! Without them, Microsoft operating systems and supported software remain vulnerable to Malware and Viruses.

This is the 1st of a 2 part tutorial on Microsoft Windows XP Updates. Do you recognize the icons and messages that appears in your System Tray (near your clock in the bottom right-hand corner of your screen)?

Windows XP has gone End of Life (EOL) on April 8th 2014. This means no further security patches or updates for this Operating System. My advice is to move to the latest operating system version as soon as possible


Home computer users like us may recognize the icons and messages, but know very little about the significance behind them. Therefore, Part 1 of this tutorial series aims to:

Part Two compliments the bigger picture described here by walking you through the practical choices and actions to ensure your computer is appropriately protected.


What Are Windows XP Security Updates?

Microsoft Windows XP Updates are packages of software regularly issued by Microsoft to correct errors in Windows XP, so the operating system is not exploited by online cyber criminals.

Microsoft also release non-security patches to improve various elements of Windows XP, such as performance and functionality, i.e. make your machine run better and do things you need it to do.

Windows XP was released in 2001 with lots of bugs in it. There are over 40 million lines of code that make up Windows XP, according to estimates online (no one knows for certain).

Therefore, it is not too surprising that some of this code is incorrect. Even a Company the size of Microsoft can't test every single thing to 100% accuracy before releasing!

Automatics Updates apply the software packages issued by Microsoft to fix the broken code/bugs/vulnerabilities, protecting you from Viruses that exploit these vulnerabilities, and enhance your user experience. If any patches are required by your computer, Windows XP can download and install these for you automatically, without any intervention by you.

You can also be notified before downloading the software packages.

The Automatic Updates Service also modifies the download speed of the required patches so as not to impact on your computer activities.

The protocol that makes all this possible is called the Background Intelligent Transfer Service (BITS).

It is worth noting that Windows Updates were once a manual process. When Windows 95 was released, the only way you could keep your computer patched was to download manually from a Microsoft Website.

The Critical Update Notification Utility that come with Windows 98 prompted you to either install the patches for your machine, or defer by 24 hours. The Automatic Updates Service that comes with Windows XP is a much enhanced approach to keep your computer as secure as possible.

Next we look at the different types of patches Microsoft issue.


What Types Of Updates Does Microsoft Issue?

Microsoft can issue the following types of patches to home computer users:


Windows XP Security Updates are released globally by Microsoft to fix a specific security-related bug for a specific Microsoft program.

For example, a security update could be released to fix a flaw in the Operating System, or a Microsoft program such as Office.

These types of Microsoft updates for XP have a severity rating, based on the seriousness of the identified bug. Critical Updates are released to all Microsoft Windows XP users to fix critical bugs that are non-security related.

For example, in 2004, when you download Windows XP SP2, you could encounter installation issues if your computer's BIOS did not support Pentium IV processors. Definition Updates are the latest releases of things like pattern files for products such as the Microsoft Security Essentials.

They ensure your computer is protected as much as possible.

Critical Drivers are optional driver updates detected for your computer. This is Microsoft's attempt at keeping your computer running smoothly.

My Personal View is to avoid installing Windows XP driver updates. Instead, go to the manufacturer's website and use their drivers instead. They tend to be more stable and comprehensive.

Service Packs are a combined batch of all the patches previously explained in a single software package.

They keep Windows XP and other Microsoft products current. This is to avoid further problems in the future. They can also include feature changes to improve performance and give users more choice. 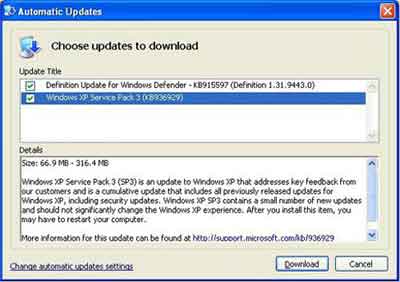 Update roll ups are like mini Service Packs. They combine batches of updates of a specific type, e.g. Security, to address specific issues with a specific program. The next section briefly discusses the Microsoft Security ratings for Security updates.

Microsoft Windows XP Updates are essential to fix the thousands of vulnerabilities that are disclosed each year.

Microsoft's Severity Rating System is really to help IT professionals determine which patches to issue in what order across the Organizations they support.

Therefore, we are not going to spend a lot of time on this topic. However, it is worth home computer users being aware of what Microsoft have in place to help get urgent updates installed ASAP.

The table below shows you the Ratings and Definitions Microsoft use to classify their Security updates. The "Your Action" column is my view on what you should do when you are alerted to new patches.

The final section looks at the Microsoft Update Release Policy.

Microsoft issues critical patches every second Tuesday of each month. This is known in the IT industry as Patch Tuesday.

Microsoft also releases other patches on the intervening Tuesdays. These patches tend to be definition updates, and security updates that have a Low Severity Rating.

However, Microsoft will release critical and important updates outside of Patch Tuesday if required. These are often known in the IT industry as Out Of Band patches.

An example of this was on Thursday 29th December 2011, which Microsoft released a critical update to address a bug which allows cyber criminals to issue Denial Of Service (DoS) attacks.

A DoS attack is where the cyber criminal sends lots of 'requests' of the Server or Service, causing it to crash.

They use Operating System vulnerabilities and supporting software to execute their attacks.

It is reported that Microsoft decided on the Patch Tuesday strategy to help Companies to organize themselves and conduct their testing before releasing the patches to all their computers.

However, it is also reported that cyber criminals use this monthly release of critical updates to plan their attacks.

Issuing their latest Malware the day after Patch Tuesday means it has the longest amount of time to infect before a patch is issued.

Microsoft Windows XP updates are essential for keeping your system up to date and secure. There are many criminals online ready to exploit the bugs that are known about.

To conclude this page, I include a few links I think are useful and informative:

Microsoft Brochures, Fact Sheets, and Tip Cards offers lots of advice from Microsoft on how to keep you and your family secure when online.

To read more about the Denial of Service attack referred to above and patch Microsoft issued, take a look at this Security Week article (Note:- This is very technical!).